Clearly Houston: There is Trouble in Washington 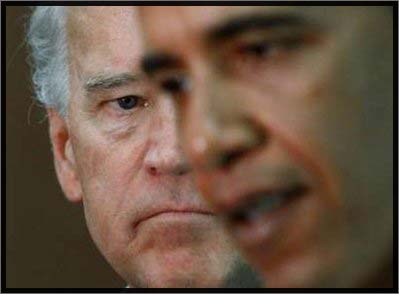 This is clearly a photo of Obama and Biden…one might also confuse them as being “dumb and dumber”…They like to use the word “clearly” a lot but one has to wonder if they truly understand it’s meaning as they are incapable of being truthful and forth coming to the American people and have blatantly shown little to no respect for our Constitution. Maybe while being a Constitutional scholar, instead of learning it’s meaning he was looking for ways to re-write or destroy this timeless document that is the foundation of this country.
The year was 2007 and then President George W. Bush was preparing for more action in Iran and ole Joey had this to say:

Was that only relevant because of the party in which Bush represented as it seems now that not much is being said to hold him accountable for Obama doing just that!

Not only is Obama seen to be weak not only in leadership but is clearly in over his head. This was prophesized by many of the pundits of the day while he was busy campaigning for office after only having been in the senate for such a brief period.

This administration has taught us a valuable lesson one we must take to heart; no longer can we judge the candidates that will be vying for our votes. Words come easily especially to one as blessed with such a forked tongue as Obama. We must and it’s our duty as Americans to vet the many candidates that will be seeking to dethrone the “Not-so-great-one.”

• Obama is always late when it comes to dealing with a crisis in the World
• People in Bahrain were calling out to him for help, did they get it?
• Obama supported the ousting of Hosni Mubarak while the Islamist Brotherhood was waiting in the wings
• Obama has failed beyond comparison to see growth in our economy
• People across the nation are desperately looking for jobs
• Obama has “unconstitutionally” implemented Heath-care reform that remains even more unpopular now than it was just a year ago
• His desire to vacation and go on golfing expeditions has only weakened his already slipping poll numbers
• While gas prices are on the rise here in the USA, Obama sees fit to give millions to another tyrant to drill for oil instead of utilizing our own natural resources.
• His associations with the likes of George Soros and Louis Farrakhan have clearly showed the path he has chosen to bring about his idea of change, one that leaves many within the nation with a sense of hopelessness.

Remember Rahm Emmanuel’s famous statement, “never let a good crisis go to waste.”? Apparently Obama either partially read that statement or chose to ignore it like he has the majority of the American people. This is apparent by the latest poll numbers coming from Rasmussen were he is tanking again with a -20%.

Qaddafi for weeks has been murdering his own, while the rebel’s that are trying to rid Qaddafi as their tyrant who is well known for this egregious act, are seen on news broadcast calling out to Obama for help. Other countries quickly condemned these acts and are in the process of calling for a “no fly zone.” Yet, Obama has taken his time with weak attempts from Sec. Clinton to demand humanitarian treatment of the people of Libya. Like previous protest that have occurred in the Middle East, Obama seems to be picking and choosing the ones he strongly supports. Only as of late has he come out and made statements in reference that Qaddafi needs to step down.
Obama, failing miserably with his foreign affairs etiquette and the mishap of him speaking out with support regarding the Wisconsin union protest doesn’t fair well with the majority of Americans.
The world seems to be in a tail spin as in the middle of what is already taking place across the globe, Japan is hit with a 8.9-9.0 earthquake which set off the tsunami that has left the country devastated and thousands unaccounted for. Yes, Obama did promise and he did deliver aid when it was called upon to help these people many that have ties within the continental United States. However, with all the turmoil we are facing now with the possibilities of a nuclear meltdown. Obama still finds time to hit a few balls out on the green! Imagine the outrage if President George W. Bush had gone golfing in the mist of the 9/11 terrorist attacks! The media and the progressives would have been foaming at the mouth trying to be heard by anyone with a microphone and a television crew!
America needs a LEADER not an appeaser, let’s just pray that we can hold strong, continue to support those in Japan that need our help by donating to the American Red Cross and hope that we are still here to vote Obama out in 2012.